Today I got caught.

I got caught in the place in between…..the place between remembering and moving on.

It’s not a bad place to be.  But when you remember, and you find yourself in a sad place, that’s when you get caught.

It’s a dichotomy.  Actually it’s a di-caught-omy.  And the thing that did it to me was the single Asian pear that became the biggest harvest ever. 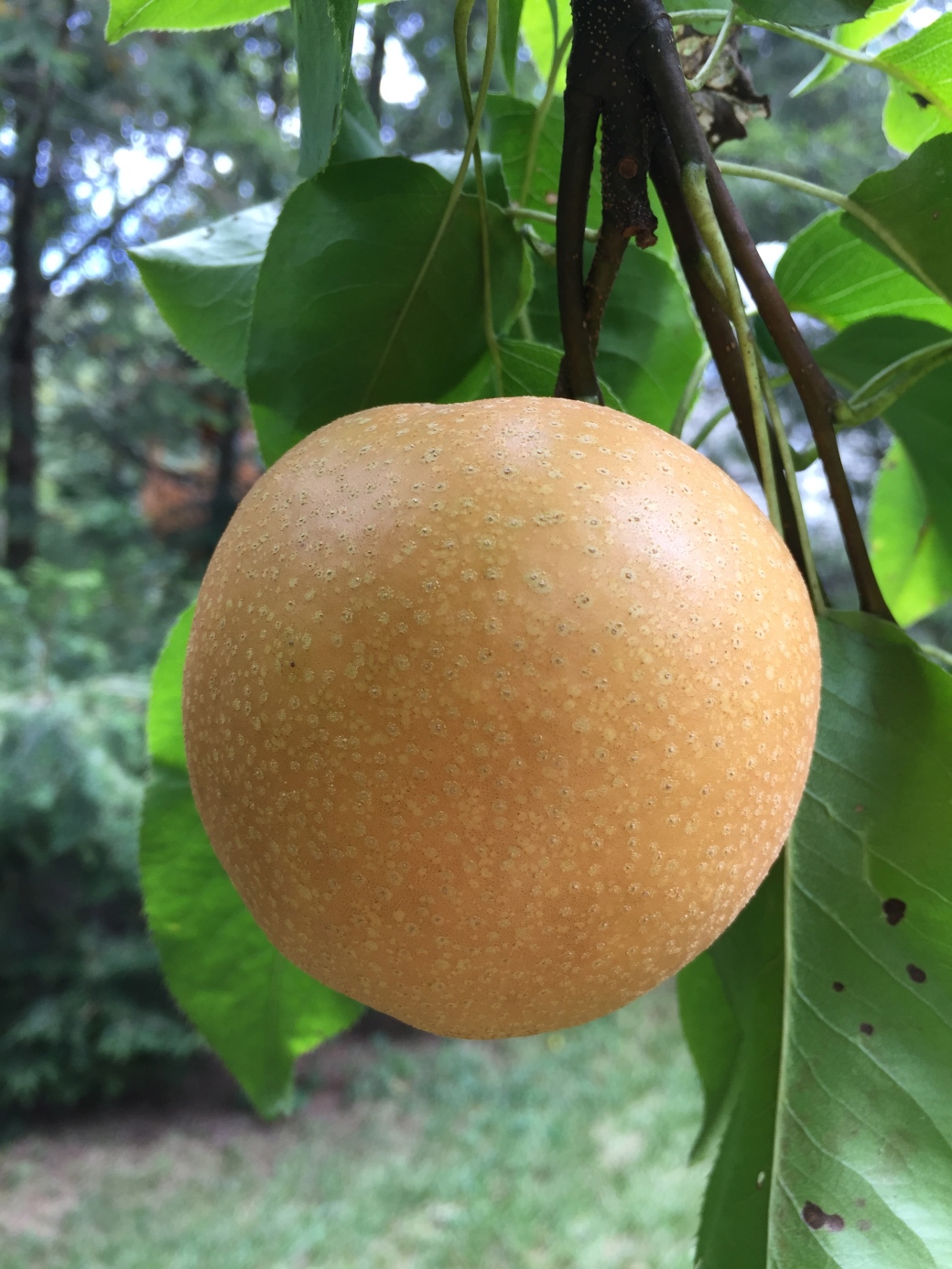 This was the Asian pear from my back yard.

It was the only pear produced by my Asian pair tree…..the Only pear this year.  But that is a wonderful thing!  A good thing.  A great thing!

Two years ago, before we moved into this house, Andrew asked me what I wanted for my birthday.  “I would like an Asian pear tree,” I said.  So Andrew gave me not only an Asian pear tree but also four lilac bushes, and we set out to plant them in the back yard.  We started with the pear tree.  “Dig a three-foot deep hole.”  That was one of the instructions for planting.  As it turned out, mixing the fertilizer stuff with the mulchy stuff was much easier than digging the hole for all of it!

It was a hot day.  We had moved in some furniture and were sweaty and tired.  Poor Andrew!  He was sweating and digging, digging and sweating…..well, trying to dig, I should say.  He looked at me and said, “Maybe we should ask Jerry?”

Our lovely neighbor, Jerry!  God bless Jerry!  Jerry was willing to join us for everything from handyman jobs to laugh-out-loud conversations in the middle of the road.  (I’m recalling that there may have been more of the latter!)  Andrew went to get Jerry and when he saw what we were doing he looked at Andrew……and he laughed!  He laughed and laughed and laughed!  “You’re never going to dig a three-foot hole in the Lemont dirt!”  Of course his response was all in fun, and telling this story is something I know Jerry has done on numerous occasions! Anyway, Jerry helped us dig a hole, we planted the pear tree and the lilacs, and we crossed our fingers. 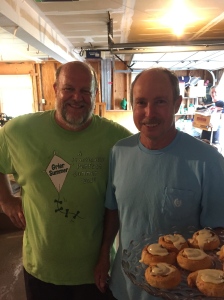 (The first pic here is of neighbor Jerry laughing – notice the gardening tool in his hands! The second pic is of Andrew and neighbor Mike, who brought us a snack!)

Since then I’ve kept a fairly good eye on that tree.  And I’ve been hopeful since day one that it would take hold and eventually grow some fruit.  Last year it looked good in the spring, it was growing well, and after I learned about Reiki I would go out and visit it, sending it healing vibes.  This spring I went out into the yard not expecting to see anything on it at all, and what did I see?  One pear!  One Asian pear that had come from One blossom on my One tree!  Excitement!!!!!!

Today the pear was ready to pick!  The girls and I shared it while we were all here together.  I think Andrew was here with us too, and I think he was laughing at the whole scene (one pear, four girls).  Actually, he was probably feeling a little proud.  I’m a little sad that since it was an opportunity that we needed to take quickly I didn’t get to invite Jerry and his wife, Susan, to share in the pair cutting.  (They know about it now!) 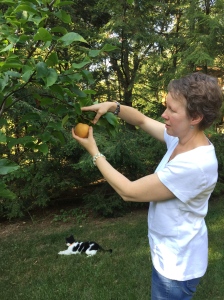 That Asian pear was the sweetest, most wonderful thing I’ve ever eaten in my whole life.

Earlier this week I caught a glimpse of the Asian pear tree in our old back yard.  Wow, is it loaded!  I sure loved that tree.  If anyone ever cuts it down I will cry.  Bob, the head of maintenance at Grier, will attest to the fact that I would.  Years ago there was a new guy helping with lawn care, and he didn’t quite know the ropes.  He was trimming bushes and really did a number on the pear tree.  I’m surprised it yielded anything after that!  I called Bob and I cried.  I literally cried over the phone.  “Please, Bob, don’t ever let anyone do that again!”  Bob was sympathetic (and maybe a little disturbed).  Thank you, Bob, for your understanding.

[For the record I just need to say how much I miss Bob, Little Bob, John, Bill, and all the guys who work tirelessly to make the school’s campus a beautiful, functioning place. Thank you.  Sorry, I got caught again….now, back to the blog.]

I would pick bags of pears and take them over to the school.  I’d give my friend, Yong Sook, full bags just for her, and she’d eat a whole bag in one day!  I’d make muffins, pies, and pear pancakes, etc., etc., etc…….  I’d have a basket sitting under the tree so the Grier girls could grab one that was ripe on the way to riding or wherever.

I imagine I will always be getting caught.  A snag here, a tug there.  I’ll get “caught” between the old and the new, and it will be okay.  And at that same moment I will be ready for what’s ahead.  I think what’s ahead can be pretty good if I let it. 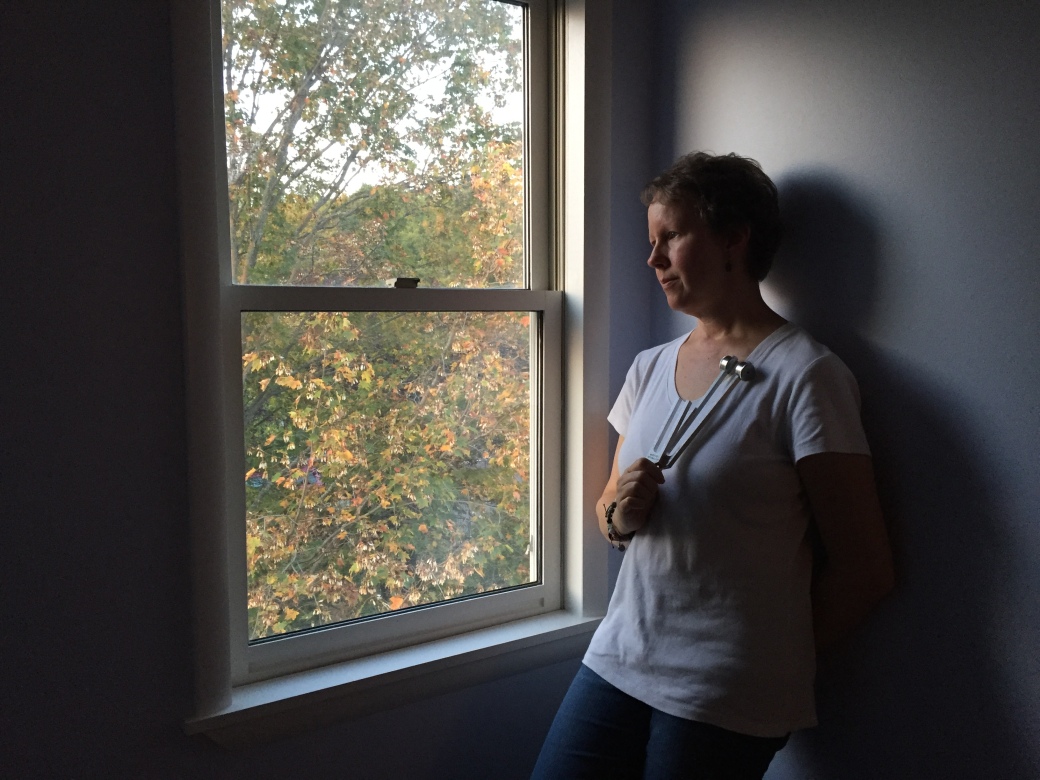 I have a new tree to love.  It provides a really cool tie between what was and what is to come.  One pear will lead to many pears, and many memories pave the way for many more to come.

There’s another dichotomy, too.  There can be something new and beautiful that rises up out of a terrible tragedy.  Trimmed branches grow again  Life can spring up from almost nothing.  And healing comes after death.

Here’s to remembering….and moving on.

(Follow up note:  Jerry and Susan have relocated and I don’t get to see them like I used to.  When I got in touch with Jerry to ask for permission to use his part of the story he told me that he had fallen while trimming tree branches.  He broke some ribs, his back, and his leg!  He will be in a wheelchair for 10 weeks.  Please send prayers, good vibes, and healing intentions for this fabulous fellow and his patient spouse!  I have no doubt the he will rise to trim again!)

2 thoughts on “Remembering And Moving On”